“So you’re her.” Three words, uttered softly, but delivered with utter scorn. The hair on the back of my neck rose as I swivelled around and met the eyes of the person I had felt staring at me.

Grasping each side of the casing with a meaty hand, legs spread wide, her girth filled the door frame to my office. I swallowed. Hard. I had known this day would come eventually, but my office? Located on the second floor of the Hamlet building, other than storage, mine was the only room up there. Me, the only person. 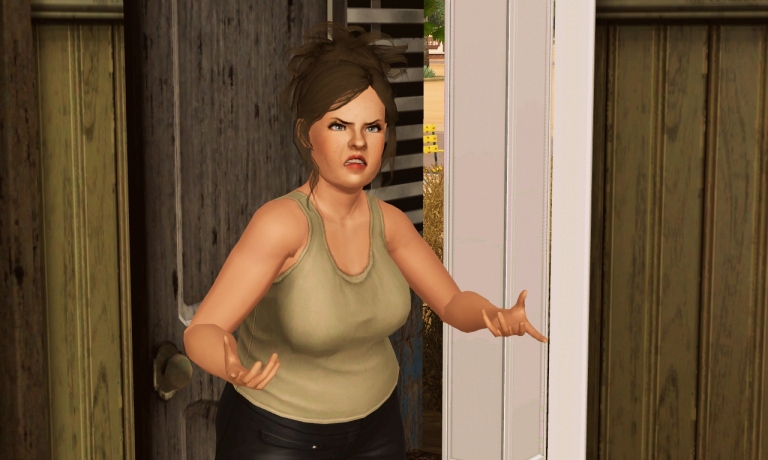 She didn’t move. I stood…maybe that would balance things out. I had a good 4 inches on her in height. Trying to remain calm, I asked if I could help her. “No.” was her clipped reply. “I just wanted to see what I was up against.” And she turned and was gone…as quickly and silently as she had appeared.

I sat back down as I felt beads of sweat trickle down my armpits. So much for antiperspirant.

I had heard about her for years. Tough as nails; stronger than most men; a good heart; a fighter; all muscle. Those were a few of the ways my husband had described Lilly* after his many encounters with her.

They had met years prior, in another northern community. My husband, a Mountie, was working when she was brought into the RCMP Detachment cells after being arrested for starting…and ending.. a fight at the bar across the street. The two officers that lead her in were having difficulty getting Lilly into the cell. Hands grasping either side of the cell door and legs spread, feet firmly planted, she wasn’t moving. Ron ducked under her arm, stepped into the cell and said, “Come on Lilly. Come in for me.” Well…she took that as an invitation…and released her grasp and stepped quickly into the cell. Thankfully not before my husband, even quicker, ducked out and slammed the door. I think for Lilly, it was love at first sight.

Each time she was arrested, which was often, she’d ask for Ron….demanding his presence whether he was working or not. It was a challenge for the other members to get her to stop fighting them and get in the police vehicle or cell. One night while trying to arrest her without a fight, she looked at my husband and his partner and said “I’ve never hit a woman, but a man is another fucking thing.” She never swung at Ron though.

Years later when we moved to her home community, and after her dropping in to ‘meet’ me, the phone calls started. At least three nights a week, the phone would ring, I’d answer it and it would be Lilly wanting to speak with “Sarge”. Many a night “Sarge” would be out on another call. It was the busiest detachment we’d been at, and the most violent. Seven members to police a community of just over 900 people.

She had several ‘pet’ names for me, suffice it to say, none of them flattering. Midnight, 2am, 3:45am…didn’t matter. When Lilly got in the bottle, and often in a fight, she’d call “Sarge”…often just to talk. And often, after passing the phone to him, he would lay in bed and talk Lilly off whatever cliff she was on. An hour, 20 minutes…once over 2 1/2 hours, he would patiently lay there in bed talking her through her demons, all the while I laid beside him fuming at another sleepless night because of the other woman in my husband’s life.

Often, as I mentioned, “Sarge” would be out on another call when Lilly phoned. I’d ask if it was an emergency, did she want me to call another ‘cop’ for her, was she in danger, had she hurt someone, had she hurt herself….and so we danced. Over the phone. Me trying to be as patient and understanding as my ‘social worker’ husband, all the while getting more and more short tempered. Lilly, getting more and more agitated and verbally abusive.

One night, after going in circles with her for what seemed like hours, and her threatening to kill herself if “Sarge” didn’t call her, in anger I shouted “DO YOU WANT ME TO LOAD THE DAMN GUN OR SHARPEN THE KNIFE?” Not my finest hour.

As the receiver slammed in my ear, I was instantly regretful…and terrified. What if Lilly DID kill herself? I would forever live with the fact that  perhaps I had somehow encouraged her. I immediately called Ron. After calming me, he went to find Lilly. And took her to jail…where she wanted to be. We both slept knowing she’d make it safely through another night. I never lost patience again with her regardless of how frustrated I became. I finally realized that Lilly, like many of the people that crossed our paths, was dealing with demons that we could never understand. A lesser person may have succumbed, but not Lilly. She fought them with every breath…and drink… she took.

Weeks before her youngest son’s wedding, Lilly had talked to Ron and told him that she was making him a promise. She was NOT going to drink at her son’s wedding. That way, she said,  she was sure she’d stay out of trouble and not ruin his big day. The best laid plans.

It was a Saturday night, about 11pm. The phone rang. It was Lilly. Ron was home but not on duty. He just said “Oh Lilly. You promised.” Not accusatory, not judgemental. Just sad. He got up, put his uniform on and left the house. I waited for him to come home. Hours later when he finally got home, he started to laugh. You know that old saying, you may as well laugh as cry? Well, this was one of those times.

The wedding had gone without a hitch, but a couple of hours into the reception, with several drinks in her…and most everyone else, Lilly’s sons got into a scrap. All three of them. With each other. Lilly reacted and jumped into the frey…cold cocking all three of her boys, including the groom! “They pissed me off and ruined the day” was her explanation to “Sarge” when he asked her why she’d done such a thing.

We both have many  Lilly stories, Ron more than me. From that very first moment, these two people, with such extremely different lives, felt a kinship, a bond of caring and respect. It had nothing to do with anything more than the fact that each had empathy for the other.

A few years ago, we were saddened when we learned that Lilly passed away. Odd, but even after all the hours I spent with her on the phone over the years, I never saw her again after that one day that she stood in my office door eyeing up her competition. But her memory lives on as part of our collective family history, for in a strange and wonderful way, that’s what she became. Part of our family history. She caused us many a sleepless night, but most of all she made us laugh. Rest in peace Lilly.

* Lilly is not her real name, and it’s out of respect for her and her family that the two communities aren’t named in this post.

In hindsight it was fun, exciting, new. While I lived it, meh….not so much.

Being married to a mountie (A member of the Royal Canadian Mounted Police) and being posted (AKA, transferred) from one small northern settlement to another was anything but dull.

We arrived in the Beaufort Delta town of Inuvik on August 3rd. On August 18th, it snowed…and I cried. It seemed the harder I cried, the more it snowed. I had been tricked. Promised a life of adventure…living where few had ever had the opportunity. Seeing the vastness of our great country and all the opportunities that the Canadian north held for me; for us. All I saw was snow.

A few weeks after we arrived, the Canadian base…and the Canex… closed. Canex,  for those who don’t know,  is a outlet for retail stores and services for members of the Canadian Forces and RCMP members have had access to those services.

Prior to closing the base, they had offered for the RCMP members to put in a ‘barge’ order from a grocery supply wholesaler in Edmonton, but rather than ship the order up the MacKenzie River by barge the next summer, they would actually fly it in on a Hercules aircraft within three weeks, prior to the final shutdown.

This seemed like a great plan given that shopping locally was extremely expensive (think $18 for a two litre jug of milk and about $13 for a 5 lb bag of potatoes) Problem was, there was one catalogue that we got for six hours per family. This ‘catalogue’ was a four inch thick photo copied listing of words and prices…no photos; not very good descriptions and vague specific information on many products. A “Box” of walnuts turned out to be a ten pound box of bulk walnuts…not packages. Oh dear…this was going to be a challenge.

Not only placing the order was a challenge. We had just driven across Canada, outfitted ourselves in northern winter garb and two preteens in school clothes and supplies. Where would we get the money for this food order that was supposed to last a year?!

After my amazing children offered to count the squares of TP they used on each ‘go’,  (I graciously declined the offer) we had a rough calculation of how much we’d need for a year, along with boxed scalloped potatoes, canned fruit (the Franklin Expedition sprang to mind during that particular computation) , popping corn, yeast and other baking supplies. WHEW!!! What an exercise! All we could do was hope I actually knew how many packages of spaghetti I would cook in the coming months. Our order would be supplemented with fresh produce from The Bay store….not the one you are probably familiar with…the locally run grocery/drygood/build supply store Hudson’s Bay Trading Company.

Fortunately the housing we were supplied with had a storage room on the second floor specifically for the purpose of ‘barge’ orders…a walk in larder of sorts.

Off to the bank we went and took out a loan…yes a bank loan for food….for $3000. A HUGE amount of money for us now, but in 1986 that was a car! Crazy! I had surely fallen through the looking glass and my name was Alice. I couldn’t believe we were borrowing money for groceries!

Soon after, the mighty Herc engines roared overhead and the plane landed with our orders which were then transferred to an aircraft hanger.  I had already volunteered to help sort everything. Our orders were all mixed together on pallets, and needed to be sorted by family using lists they supplied that we checked against the manifest.

I remember driving home in our Toyota Landcruiser with our $3,000 worth of groceries in the back. I felt sick to my stomach. I thought for sure we’d at least need a cube van to transport it all….but no…..it all fit in our little truck.

We did okay that first year, although by the time June arrived I was sick of popcorn and my family never wanted to see another fruit jumble cookie again. (I had ordered vast amounts of dried fruit for Christmas baking that lasted well into Canada Day weekend).  We didn’t get rickets…or tin poisoning… from the canned fruit, and those walnuts? I traded about half with other wives that had too many chocolate chips or baking beans.

Oh, and the TP? We made out just fine and never did have to use the Sears catalogue. 😉