From cradle to grave, the only people you’ll have with you, if you are lucky, will be your siblings.

Sure, even with siblings, one of you has to die first…and depending how mad you make any one of them at any given time, that one could be you.

Siblings, well, mine anyway, have long contemplated, struggled with, questioned, and yes, alas, felt very sorry for themselves based on nothing other than the order of their birth. 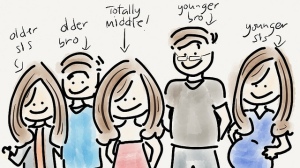 The Baby. It doesn’t matter if you have one sibling or several, The Baby is the apple of their parents eye. Why? I’ve wondered that myself…and have come to the conclusion that parents are so relieved to know that there will be no more diapers, no more sleepless nights, no more temper tantrums and time outs that they forgive anything and everything that The Baby can throw at them. The Baby, however, believes that the parents reached perfection with their birth and thus stopped. Suuuuurrrre they did!

The Baby rarely does anything wrong. In fact they rarely do anything. Waited on hand and foot, treated like little prince and princesses, The Baby is general the most spoiled in the sibling group. They have parents doting on them as if this was their last chance to get it right, they’ve screwed up the eldest and middle children so badly. In addition, it is also the fault of the siblings as they too tend to get sucked into the outlandish, manipulative and often hellish demands of The Baby.

What happens, as it did in my sibling family, when many years later…ten in my specific case…another baby comes along? OMG!!!! Well, then the new child becomes The Baby, and the former Baby takes on the role of The Martyr….in addition to The Baby.

The Martyr, or as they are more commonly known, the middle child. OMG!!! Do you know anyone else so hard done by? I know for a fact they are the most persecuted, most ignored, most invisible, most misunderstood people in the world….I know because I am married to a middle child AND I have two siblings who are middle children, one legit, the other a former baby. Their empathy for one another is epic. Marriage counsellors, phycologists and psychiatrists  the world over can only wish for unions of middle children. They’d never run out of clients.

Middle children also fancy themselves, the family peace keepers, the care takers, the ones who have love flowing through their veins and empathy from their pores. The truth is they are the “I can get away with murder” siblings. They know that everyone is watching The Baby being precious, and waiting for the eldest to trip and fall from grace, and so, sneaky and conniving, the Middle looks for ways to get into trouble but never get caught…or at least blamed.

And then we have people like me…the Eldest. The REAL marytrs in the hierarchy of ‘siblinghood’.

Not only are we raised to set the example for our younger siblings, we must assume all blame for any of their shortcomings, failures, insubordination, or inappropriate behaviour. OMG!!!! What’s that all about??? It’s not our fault those little rotters don’t listen or do as they’re told!

We are expected, no, forced,  to share everything we own with our siblings…or else! Then, when we loan them our brand new toy and they break it, we are the ones punished!! WHAT????? I didn’t break it!!!

When you throw into the mix, the three siblings that live with you under the same roof  all happen to be female, HMPFT…the dynamics really change.  You can’t even have your own time of the month for gawd’s sake!! Those sisters of a similar age will move heaven and earth to have their cycle match yours. It’s almost demonic!

And forget wardrobes! It’s bad enough that you rarely get new clothes, but wear hand me downs from the family up the street or cousins in other provinces, but when you DO get something new???? ALL of you get something new…and matching. Yes, okay the colour may be different but when you are fourteen who the hell wants to dress like a 12 year old, even if she is more mature than you are? Or worse a 10 year old!!! Dear mother of gawd!!! Weren’t your parents ever put through this same form of hell on earth? What part of their own torture did they forget???

And then it dawns on you…The Parents remember…and this is their grudge taking birth in the form of retribution against you, their own child! Their first born!!! OMG!!! What kind of monsters are these people?

Then, it happens….it starts as a small dot of light…you just catch it from the corner of your eye, but when you turn quickly to look…it’s gone. Was it ever really there? But then, slowly, over time, over hours, then days, and finally months and years, slowly…ever so slowly …the dot becomes a glimmer, the glimmer, an orb…and then? Then the paradigm shifts. And much to the dismay…and fear…of The Parents, you and your sibling become allies. Friends. There is a common enemy and it is the unfair, nasty, tainted, poisonous people you have been placed with…for by now, you suspect…actually, you are certain, that you are ADOPTED. That your real parents are Ward and June Cleaver.

You keep that little gem tucked away. It’s your ace to get out of this hole. You know, in your heart of hearts that Wally and the Beav are your real siblings and that with brothers, you, the only girl will be the darling of the family. You know that your brothers will protect and adore you rather than compete with you, and your real parents will shower you with love and affection, for how can they not? Your brothers are both older than you! You will be The Baby!!!

And then, you look in the mirror. Your fate is sealed. You are not adopted. The face looking back is the younger, more feminine face of your father. You can’t deny it….no more than he can. You do have three siblings and they are all sisters. That too is a fact.

Time passes, you grow up, you have your own life. And so do all your siblings. The rivalry is still there, but now it takes on more of a joshing, teasing form. Oh, you still argue, disagree, get jealous, get pious, get even. You even go through periods of not speaking. You hurt one another.

And all of it is because you know: you are siblings. Sisters. They are yours and you are theirs. To love, to take advantage of, to abuse, but let there be absolutely NO mistake. God help the outsider who does anything to hurt any of them, because He will be the only one to protect them from your rage. You have now, have always, and will forever had their backs:  Sisters cradle to grave.